Rotary head has passion for service

Sonia Alleyne’s penchant for service to her fellow man and her search for a forum in which she could be most effective in the delivery of that voluntary service led her to Rotarianism.

On July 1 the senior member of the Rotary Club of Barbados South assumes the role of District Governor for Rotary District 7030, a diverse district comprising 17 countries with three languages, 74 Rotary Clubs, Rotaractors and Interactors.

It is a position which the professional accountant, wife and mother will hold for one year, and she has declared her commitment to achieving the goals set out by incoming Rotary International president Shekhar Mehta.

“My job is to ensure that we follow what he would like us to achieve,” Alleyne said.

“We are about changing lives, eradicating polio, being good humanitarians, promoting peace around the world and generally espousing the benefits of what Rotary has to offer and the contribution that we have made in the 116 years that we have been in existence.

“My job is to make sure that the District is able to fulfill his (Mehta’s) wishes and to make strides in ensuring that we are a united district for the cause of improving the lives of our fellow man.”

Service is clearly in the genes of Guyanese-born Alleyne, who follows in the footsteps of parents and grandparents that, according to her, have throughout their lives demonstrated what it means to serve others.

Relocating to Barbados with her parents in 1979, she spent one year in primary school at the Ursuline Convent before going on to The St Michael School for what she describes as “five wonderful years”. While in sixth former at Queen’s College, she joined the Key Club, an international, studentled organisation of the Kiwanis Club that provides its members with opportunities to provide service, build character and develop leadership. The experience fuelled a desire to continue to expend that energy after she left Queen’s College.

Today Alleyne credits Rotarian David Leacock with guiding her to Rotary. Relating her reaction when Leacock first broached the idea, she said: “I said, ‘No, I have checked out all of those things and they are not what I am looking for. I feel that I am just going to stick to doing my little things -pay somebody’s bill, buy some groceries now and then.”

She did accept Leacock’s invitation to a meeting of Rotary Club of Barbados South, which was then a predominantly maledominated service organisation with its first females members.

“I went back a few times, read more about Rotary, talked to some folks and I realised that while I was doing good for one family, I could do wonderfully well for a huge amount of people for the same amount of money that I was contributing to these families. So I took a chance and in June 2004 I joined the Rotary Club of Barbados South.”

The next Rotary year she was offered a place on the Club’s board of directors and went on to assume several roles - club administration director; community service director; membership and youth director; vocational services director; secretary to the first female president of the club. In 2012 she was elected president.

However, Alleyne is adamant the focus ought not to be on her as a woman holding the position.

“It just happened that I am the first woman doing this job in a male-dominated service club era,” she insists.

“My message is we (women) are good enough, we don’t have anything to prove. We get there because we have worked and have gotten there, not because we are women but because we are capable of doing the job.”

Meanwhile, she is champing at the bit, all geared up to make her input into and set in motion projects planned for the district such as reducing childhood obesity, a project started by her predecessor District Governor

Continued on Page 15A. 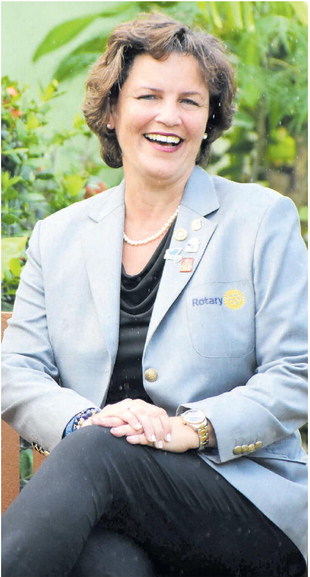 Sonia Alleyne takes over on July 1 as District Governor of Rotary District 7030 comprising 74 Rotary Clubs in 17 countries of the Caribbean and South America. (Picture by Reco Moore)

“The members of the District will also be doing our part in bringing awareness of the environment and the challenges that we have with climate change, which affects us all in this District,” Alleyne said of a new project on the table.

There is no mistaking the new District Governor’s passion for the causes she promotes. Her commitment to her diverse roles is also evident. She is treasurer on the subcommittee of the breast-screening programme of the Barbados Cancer Society where she advocates for women’s opportunities to get the best health care and mammography options on the island; she has a full-time job as chief financial officer of the Barbados Family Planning Association; she is wife to insurance executive David Alleyne and mother to one son, who turns 21 in a matter of days.

Acknowledging her limitations and the fact that she is not superhuman, Alleyne said: “Sometimes I have to take a break and tell myself I just need a couple of days to do nothing, but then I am rejuvenated and go again.” That pause for relaxation is likely to find her “in a quiet corner with a good book”.

Crop Over also affords the opportunity to step back, let her hair down and unwind. “I love, love Crop Over,” she gushed. “It is my time to relax and push my worries aside and enjoy the festival from beginning to end - every aspect of Crop Over, the tents, the art shows, the liming and most definitely the playing of mas.” That her 80-year-old mother joins her in the Foreday Morning jam is icing on her cake of enjoyment in the major Barbados festival, which also sees her jumping in a costume band on Kadooment Day.

“That recharges my batteries and I come again,” Alleyne remarked.

The COVID-19 pandemic has put paid to that kind of Crop Over celebration this year, yet it is clear Alleyne is recharged and fired up for the mission ahead.

She said: “I rather like to be in the background doing the work, not necessarily out front, but I am out front now and I hope to be a good role model for all Rotarians young and old and a good mentor for the youth.”

For her, Rotary provides “an opportunity for me to serve society and give back to the community that has given me so much” .

Click here to see this page in the eEdition: